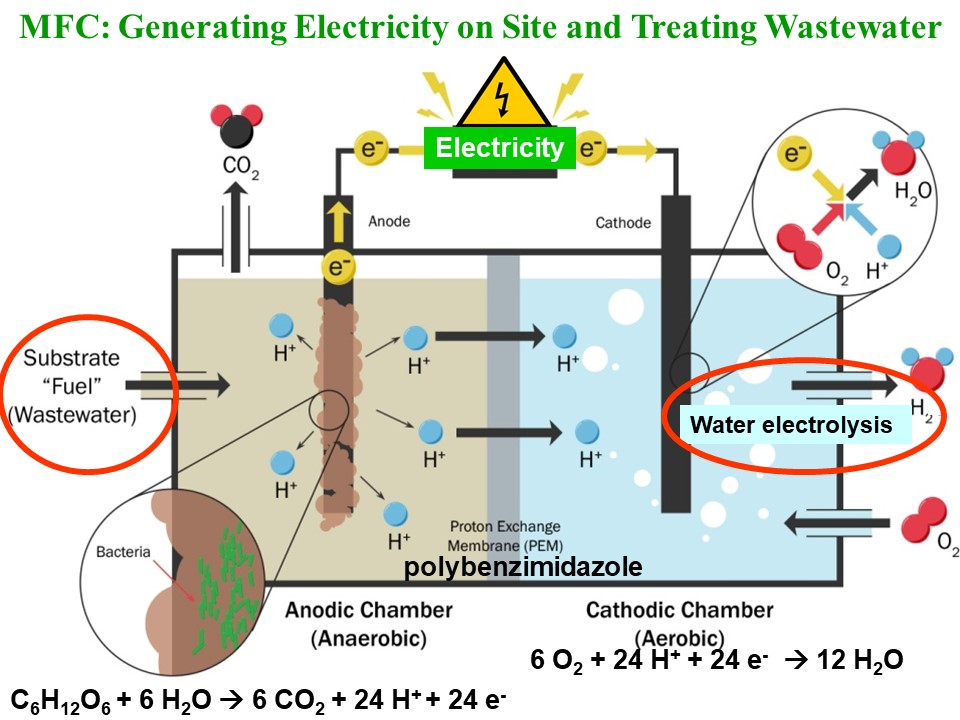 “One man’s trash is another man’s treasure. Landfill leachate that contains organic pollutants with less economic value is a trove if we know how to harvest it effectively for generating electricity on-site using bacteria, the planet’s tiniest inhabitants.

MFC that simultaneously addresses the two issues — wastewater treatment and sustainable energy production — fits the United Nations (UN)’s mission in developing renewable, sustainable, green, and clean energy. Producing electricity using MFC would add economic value to unused wastewater and represent an attempt to fight against global water pollution. Our interests in MFC stem from its ability to operate at all weather conditions and pressure using inexpensive Geobacter sulphurreducens that could form biofilms onto electrode’s surface.

Landfill leachate richly contains a variety of organic matters. Such organic compounds have tremendous chemical energy, which bacteria can release in the form of electron flows. By exploiting the electron-transfer ability of the G. sulphurreducens, MFC could produce electricity directly without combustion of the organic contaminants within the wastewater, while allowing industrial users to treat it without consuming conventional energy resources. This enables users to meet regulatory obligations at lower costs — as the amount of power generated during MFC operations halve the electricity required for aerating activated sludge— but with the same capability of removing organic matter as efficiently as do conventional water treatment plants.

If not generating electricity on site, MFC may partly reverse the process to produce hydrogen gas. When applying a certain voltage to the bacteria to complement the voltage supplied by the biodegradation of organic pollutants, this will lead to the electrolysis of water, thus generating hydrogen (H2) gas, a renewable fuel that can be commercially sold in the market. This energy production in the recovered hydrogen gas may help industries offset their treatment costs of wastewater.

Unlike activated sludge, MFC is practical for leachate treatment. As the leachate has high concentration of organic pollutants, MFC generates high energy potentials. Organic matter in the leachate has chemical energy that can fuel MFC when its bioreactor releases electricity in electron flows from anode to cathode in an external circuit, generating power as a by-product

The electron exchange takes place between the anode and the cathode chambers respectively. In the anode chamber, oxygen-starved organic material of the leachate is oxidized by the bacteria. This oxidation process releases protons and electrons, from which the MFC extracts electrical power.

During the reactions, the bacteria get food from waste for survival, while we get electricity for energy, representing a mutual symbiosis between humans and micro-organisms in nature for environmental protection. Furthermore, harnessing bacterial metabolism for producing energy that can be further commercialized will generate revenues for wastewater operators. The revenue not only defrays the cost of MFC’s operations, but also provides an incentive and means to keep on improving its prototype design and operations. The electricity generated in the MFC’s operations may supply the needs of power, while the value of the energy produced by the product may create job opportunities for the loca community.
As wastewater needs to be treated, more wastewater operators may consider the MFC to generate treated effluents that can meet the limit requirements set by local environmental legislation. The applications of MFC for building self-powered municipal water treatment system may represent a breakthrough, as it opens the door to future, where a WTP not only power itself in its operation but also sells electricity it generates. This not only revolutionizes the existing water technologies, the way that wastewater has been treated universally, thus substituting the most widely used. “